Home LifestyleWhere Have You Been?

Hello!! I hope you haven’t forgotten about me; this summer has been a wild one and I put blogging on the back-burner. Since I’ve been so MIA I wanted to highlight some of the exciting things I’ve done since you last heard from me.

White Water Rafting in Duluth, MN:
As part of my birthday present, Bryan fulfilled one of my biggest birthday wishes: White Water Rafting. I’d gone once before in Colorado and was just dying to go again. One Saturday morning, we woke up and made our way north of Minneapolis to Duluth, MN. It was about a 2 hour drive; the roads reminded me a lot of the upper peninsula of Michigan.
Once we arrived, the nerves began to kick in. We abandoned our devices and geared up with life-jackets and helmets. We got a brief lesson about what to do in various situations and finally got into the water. The ride lasted about 2 hours; much of it was spent relaxing down the river but the thrilling moments came when we encountered the large rapids. We managed to stay in the raft throughout even the largest rapids. Our entire experience was remarkable to say the least; I can’t wait to do this again!
Our First Vikings Game:
Bryan knows how excited I get for football season and usually we buy tickets to one Michigan game each season. This year, living in Minnesota, we aren’t going to be able to keep that tradition alive. To satisfy my football craving, he bought tickets to a Vikings preseason game. Now, I’m not a Vikings fan, but I can get excited about football no matter the team.
The US Bank stadium is impressive, with a glass roof, which gave it an outdoor feel without leaving us too hot or too cold! The game was against the Seattle Seahawks and was only the second game of preseason. We weren’t really cheering for either side but just watching football got me so excited about the upcoming season!
My Brother & His Girlfriend Came to Town:
In July, my entire family came to Minneapolis to visit me and see where I live. The only person missing was my brother; he was starting a new job during their trip and wasn’t able to make it out. We were both sad, so he decided to plan a week where he and his girlfriend could fly out here to see us and the cities. Summer flew by and his visited came and went quicker than I’d anticipated, but it was so much fun.
They came Monday through Friday, which only left evenings open for us to show them around. The first evening they were in town, we brought them to our absolute favorite restaurant here: Darbar Indian Cuisine. The two of them loved the food! The next two evenings, my brother wanted to get some photos of the city at night so we took him to some cool spots. To get around, we used Spin scooters (my new favorite way to explore) and he was able to get some remarkable photos. The four of us had a spectacular time; I can’t wait for his next trip out here!
Bachelorette Party & Bridal Shower:
This past weekend, Bryan and I drove to Michigan because my best friend’s bachelorette party was Saturday and her bridal shower, Sunday. The festivities began Saturday afternoon with manis and pedis at the Amway Spa. We were treated to mimosas and our personal relaxation room. After that, we went to the hotel to get ready for the night by curling our hair, doing our make-up, and of course, vodka shots!! Then, us 5 gals went out and danced the night away. The theme for the night was “final fiesta” and it sure was a fiesta.
Sunday morning came with quite a headache, but we all recovered in time for the fancy tea party bridal shower, who’s most prominent guest; Queen Elizabeth! We drank tea, wore fancy dresses, and had a splendid afternoon.
Now that things are (seemingly) calming down, I have lots of ideas for blog posts and am really hoping to get back on my Wednesday/Saturday posting schedule; hold me to it! Thanks for catching up with me; what did you do this summer?
SHARE THIS: 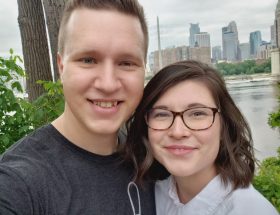 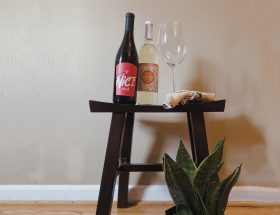 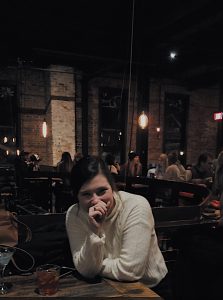 Michigan based writer, extreme wine lover, enthusiastic smiler, and busy traveler. A Busy Beas is a spot to spill unfiltered thoughts with each of you!