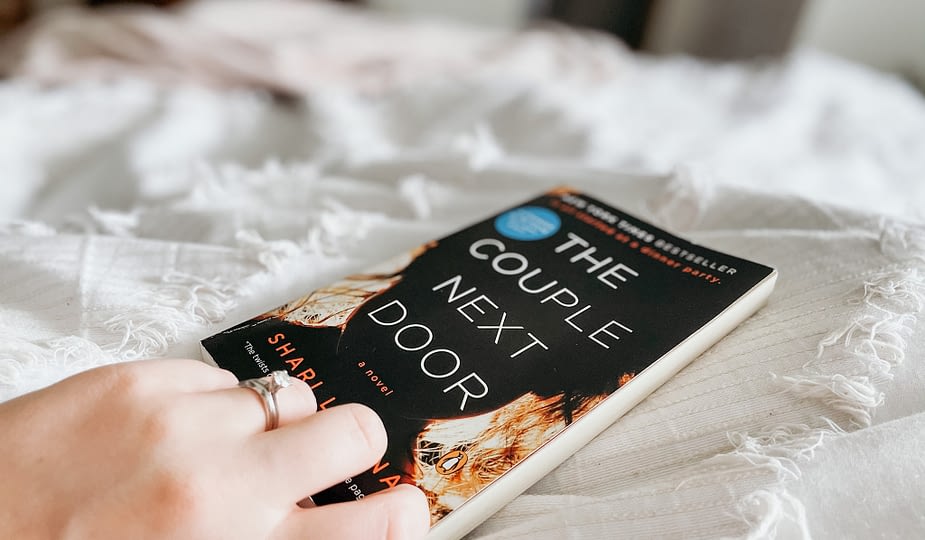 Anne and Marco Conti seem to have it all; a beautiful house in the suburbs of New York, an adorable baby girl Cora, and a loving relationship. But one night, when the couple is next door at a dinner party, their sleeping daughter goes is taken from her crib!

Immediately, both parents are suspects in the case. The walls of their perfect life begin to crumble down and nothing is as it seems. Both Anne and Marco discover secrets kept from each other, that have been under cover for years.

What happened to Cora? Will she be returned? Will they ever get to the bottom of this?

I… what? This book pulled me right in; I had to know what the heck was going on. You can’t trust a single person in this book (except maybe Rasbach, the detective on the case.) Every single one of them has a secret, and that secret is damning. Whew, this book was a lot. Some in good ways, others not so much. I do not want to spoil it for anyone so I’m going to do my best to give thoughts without wrecking the whole story for you.

Let’s start with Anne and Marco; mother and father to the missing baby. I did not like them. I didn’t truly trust either of them, and I found them rather selfish. I also felt it was irresponsible of the author to take a very real, very prevalent mental illness like postpartum depression and villainize it in the way that she did. Anne is a mother who loves her child, but she is struggling. And now, I don’t have children so I cannot speak to any of these realities. But there is one moment where she admits something pretty bad and I couldn’t look at Anne the same and I struggled to find sympathy for her.

Marco was just a piece of work. He didn’t support his wife; he did not understand what she was going through and he drove a wedge between her and her parents.

“Let’s wait and tell the police later…” One of the recurring themes in this book that drove me absolutely bonkers was this idea that they can handle this investigation and fill police in on the details later. And the detective didn’t seem to mind all that much. I really don’t like when thrillers do this. How do any of these characters think it will help them in the long run?

Okay, but also, her parents… they were manipulative and controlling of everything in Anne’s life. There are supportive parents, and then there are those who use their kindness as leverage. Her father did not love his daughter; I’m confident in that statement and I can’t tell you why. The mother’s character didn’t have enough character development for me to formulate much of an opinion on her, however, she does the right thing at the end of the book and I respect that.

Lastly, the neighbors Cynthia and Graham. This book is called The Couple Next Door and though the unfortunate event originated while Anne and Marco were at their neighbors house, the neighbors didn’t play as big of a role in this story as I thought they would. It was more about Anne’s parents and their relationship with Anne and Marco. They certainly played their role, but it was not front and center like I’d anticipated it to be.

Thrillers are finicky books because there aren’t specific boxes that they must check for me to like them. Sometimes I say, “nope, can’t have a narrator that I can’t trust.” But other times, an unreliable narrator just works. And I think there were things about this book that worked and things that didn’t. There are so many things going on here that it left me with more questions than answers at the end of this book. The concept was very intriguing and had me flipping pages like mad; but I wasn’t super happy with the conclusion. Ultimately, I won’t say skip it because I did enjoy certain elements. But this isn’t the best thriller; there are better ones out there.