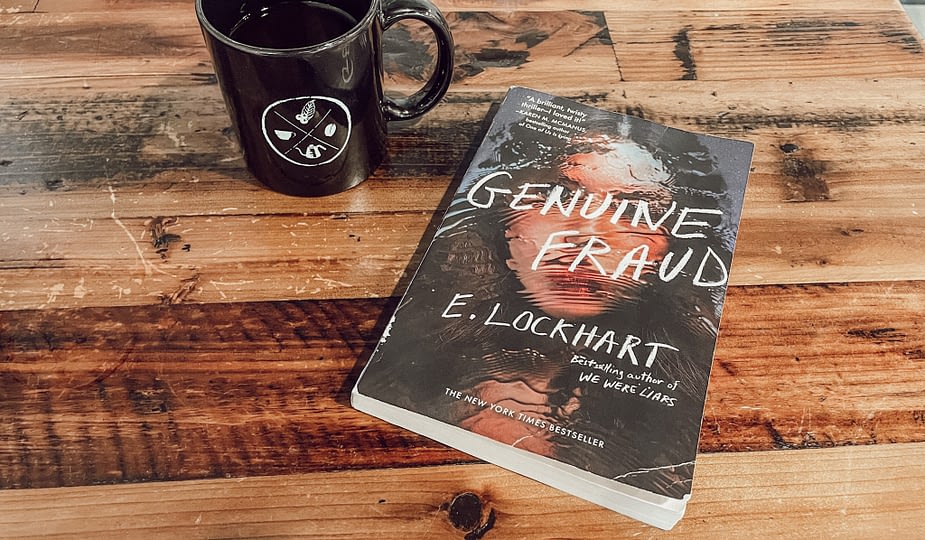 Imogen is a runaway heiress, an orphan, a cook, and a cheat.

Jule is a fighter, a social chameleon, and an athlete.

An intense friendship. A disappearance. A murder, or maybe two.

A bad romance, or maybe three.

A girl who refuses to give people what they want from her.

A girl who refuses to be the person she once was.

Over the weekend, I was perusing the shelves of a local thrift store to see if I could find any books to add to my collection. This book was one of the four I purchased! And because it’s been a while since I read a thriller, and the description intrigued me, I started it right away. While it wasn’t one of my favorite thrillers, I did enjoy it and the unique structure of this book. It’s a mundane thriller that managed to capture and hold my attention throughout.

Starting with chapter 18 and working backwards to chapter 1, Genuine Fraud is told in reverse. Right away, you are introduced to Jule West Williams, a mysterious character living lavishly at a resort in Mexico. Quickly you realize, she is on the run with lots of skeletons in her closet. It’s almost like a puzzle; with each page you are given a piece in an effort to figure out WHO is Jule West Williams and WHAT is her backstory. The structure of the story kept me constantly intrigued and furiously flipping pages. The further backwards we went, the more I absolutely had to know! While I was captured, I will say, none of the twists were particularly shocking, as readers are given small clues throughout. Additionally, because of the structure, there were times I felt confused or lost but was able to piece it together.

Lockhart is an excellent writer; while this book won’t end up on a favorites shelf, it was well written. And let me tell you, she created some f*cked up characters. I can’t say too much or I’ll spoil the whole book but I will say, none of them are very likable. And likely because none of them are likable, I did not connect to any of them, which might be exactly what this author intended.

Overall, it was an exciting, mind twisty and very messed up thriller that I was completely captured by. I’d give it about 3 stars because the twists were predictable, none of the characters were likable and there were some filler pages that could’ve been left out. If you’re looking for a crazy book, I do recommend picking this one up!