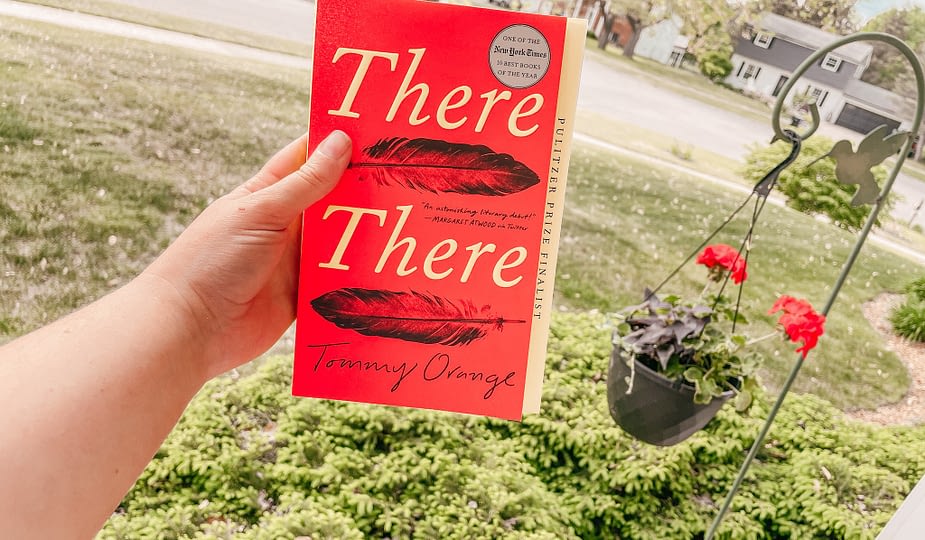 Tommy Orange’s wondrous and shattering novel follows twelve characters from Native communities: all traveling to the Big Oakland Powwow, all connected to one another in ways they may not yet realize. Among them is Jacquie Red Feather, newly sober and trying to make it back to the family she left behind. Dene Oxendene, pulling his life together after his uncle’s death and working at the powwow to honor his memory. Fourteen-year-old Orvil, coming to perform traditional dance for the very first time. Together, this chorus of voices tells of the plight of the urban Native American–grappling with a complex and painful history, with an inheritance of beauty and spirituality, with communion and sacrifice and heroism. Hailed as an instant classic, There There is at once poignant and unflinching, utterly contemporary and truly unforgettable. [Goodreads Description]

Set in Oakland, There There tells the stories of twelve Native Americans who, initially, don’t seem connected but weave together in unexpected ways. This book was one I read with my book club and it was remarkable to discuss and point out various observations each one of us made. While it was challenging to get into, Orange’s writing is striking and compelling.

The characters within this novel are so vivid and compelling; readers truly get a sense for the difficulties these characters have encountered. It shows that Native Americans are more than the stereotypes placed upon them. Because it focuses on twelve characters, there are certainly stories I wish could’ve been developed further (Blue?!) The story centers around the Big Oakland Powwow. Each character has a different reason for attending; some seeking reconnection, money, while others are there to record stories of fellow Natives or to showcase their culture through dance. No spoilers, but by the conclusion of this book you truly care about the well-being of each and every one of them.

The Interlude was the part of this book I found to be most compelling; regularly while reading this section I had to take a deep breath and re-read some portions. It highlights the privilege of white Europeans who’ve erased Native culture and pushed their narrative. It has left current day Native Americans trying to piece together their beautiful culture that was expunged. Worse so, today’s white Americans haven’t bothered to learn the atrocities their ancestors committed. This chapter had me examining the ways in which I am complicit and forced me to come face to face with my comfortable privilege.

Here is an excerpt from this chapter that still has me speechless:

“This is the thing: If you have the option to not think about or even consider history, whether you learned it right or not, or whether it even deserves consideration, that’s how you know you’re on board the ship that serves hors d’oeuvres and fluffs your pillows, while others are out at sea, swimming or drowning, or clinging to little inflatable rafts that they have to take turns keeping inflated, people short of breath, who’ve never even heard of the words hors d’oeuvres or fluff. Then someone from up on the yacht says, “It’s too bad those people down there are lazy, and not as smart and able as we are up here, we who have built these strong, large, stylish boats ourselves, we who float the seven seas like kings.” And then someone else on board says something like, “But your father gave you this yacht, and these are his servants who brought the hors d’oeuvres.” At which point that person gets tossed overboard by a group of hired thugs who’d been hired by the father who owned the yacht, hired for the express purpose of removing any and all agitators on the yacht to keep them from making unnecessary waves, or even referencing the father or the yacht itself. Meanwhile, the man thrown overboard begs for his life, and the people on the small inflatable rafts can’t get to him soon enough, or they don’t even try, and the yacht’s speed and weight cause an undertow. Then in whispers, while the agitator gets sucked under the yacht, private agreements are made, precautions are measured out, and everyone quietly agrees to keep on quietly agreeing to the implied rule of law and to not think about what just happened. Soon, the father, who put these things in place, is only spoken of in the form of lore, stories told to children at night, under the stars, at which point there are suddenly several fathers, noble, wise forefathers. And the boat sails on unfettered.”
― Tommy Orange, There There

Overall, I found this book to be so remarkably sad, yet moving. If you are looking to learn more about the daily struggles endured by Native Americans, I highly recommend picking up this book! On top of that, Tommy Orange is a magnificent writer who puts you right alongside the characters he creates. Read this!!