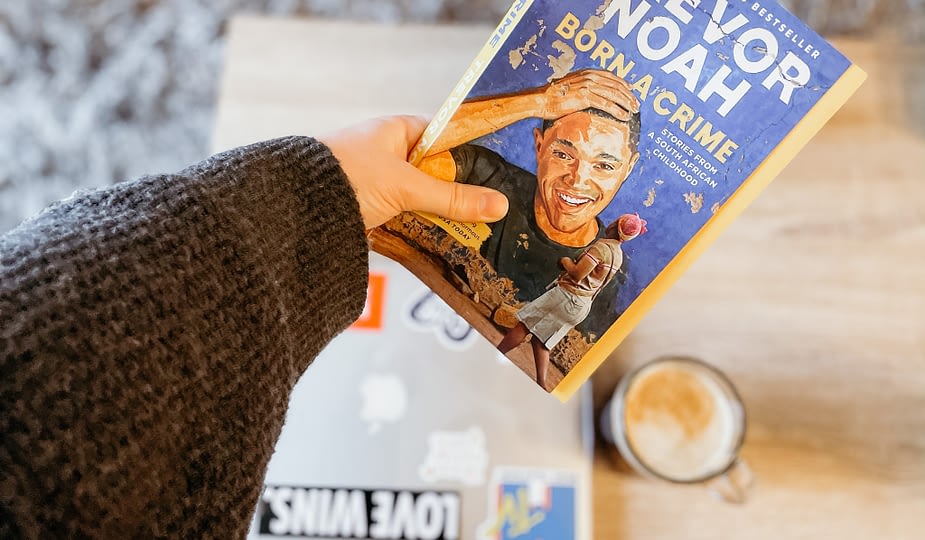 Trevor Noah’s unlikely path from apartheid South Africa to the desk of The Daily Show began with a criminal act: his birth. Trevor was born to a white Swiss father and a black Xhosa mother at a time when such a union was punishable by five years in prison. Living proof of his parents’ indiscretion, Trevor was kept mostly indoors for the earliest years of his life, bound by the extreme and often absurd measures his mother took to hide him from a government that could, at any moment, steal him away. Finally liberated by the end of South Africa’s tyrannical white rule, Trevor and his mother set forth on a grand adventure, living openly and freely and embracing the opportunities won by a centuries-long struggle.

Born a Crime is the story of a mischievous young boy who grows into a restless young man as he struggles to find himself in a world where he was never supposed to exist. It is also the story of that young man’s relationship with his fearless, rebellious, and fervently religious mother—his teammate, a woman determined to save her son from the cycle of poverty, violence, and abuse that would ultimately threaten her own life.

Born A Crime has been on my TBR list for quite a while and I’m so glad I finally read it. Trevor Noah is a remarkable writer and story-teller and this is a fantastic read. I found it to be engaging and I really felt he did a great job at placing readers within the story. Going into Born A Crime, I did not know much about the apartheid and I found his book to be extremely educational. I was completely incorrect by going into this book thinking it would be all humorous. While there are elements of comedy, Trevor Noah used this space to really engage and educate readers on the realities of his life.

Not only was Trevor dealing with the aftermath of apartheid, we learn that he grew up in a home with an abusive stepfather and it really shaped him. Each difficult moment was a building block and provided strength. He used every learning opportunity to his advantage. Within these pages there are some truly sad and frightening moments, it really made me wonder what sort of trauma continues to exist today.

I did feel as though there were elements of the book that were repetitive. Sometimes we would learn something in one chapter and it would be restated at the start of another chapter. Overall, the book did flow nicely and is incredibly well-written. I was sad that there was no bridge to tell us how he got to be such a well-known comedian and tv host, but maybe he will write another book!! 😉

Ultimately, this book has an incredible theme of the mother and son relationship. We learn how deeply she wanted a child brought into this world, and she broke the law to make it happen. I really loved learning this aspect of Trevor. His mother is a powerhouse of a woman; despite the endless difficulties she endured, her faith never wavered. I am so happy to have read this book; it’s a fantastic memoir!

We spend so much time being afraid of failure, afraid of rejection. But regret is the one thing we should fear most. Failure is an answer. Rejection is an answer. Regret is an eternal question you will never have the answer to. -pg 143