Home Book ReviewsBefore the Coffee Gets Cold: Tales from the Cafe by Toshikazu Kawaguchi 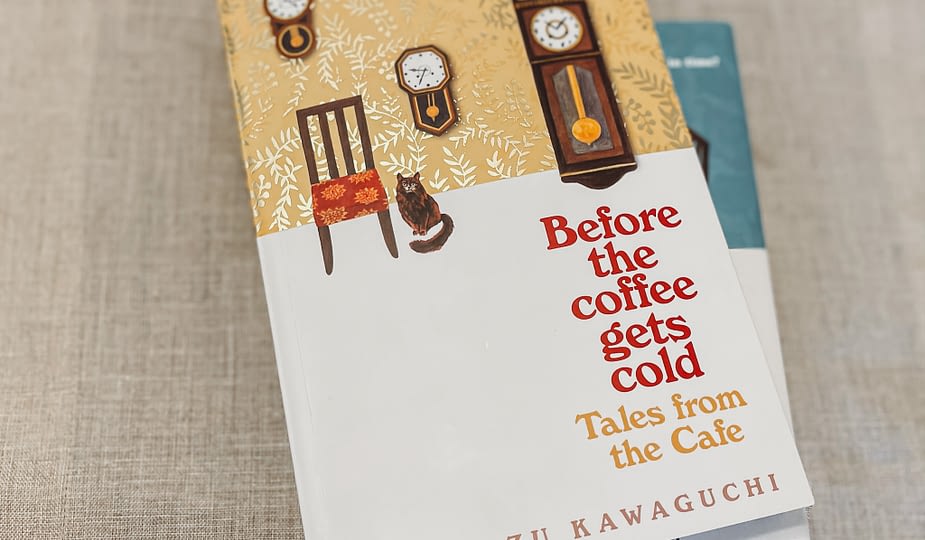 Back in the magical cafe, four more people are eager to take the journey back in time. Alongside the new characters, we are re-introduced to some familiar characters who work in the cafe. We’re told the ways in which the stories intertwine and some background on how everyone got here. This stunningly simple story allows people to face the difficulties of their past in order to make a better future.

Gosh, I loved this book just as much as I loved the first. It has the same simplistic yet profound themes throughout each journey back in time. Just like the first book, Tales from the Cafe is wonderfully written with perfect pacing.

Read my review on the first book here.

I’ve seen several reviews where people say they enjoyed the sequel more than the first book. I don’t necessarily agree with that. I loved the four characters in the first book and felt more emotionally moved by their time traveling journeys, but I love how the sequel explores and gives depth to the individuals who work in the cafe. It was so moving to hear the histories of the characters I fell in love with while reading the first book.

Similar to the first book, Tales from the Cafe is split into four parts, each telling another journey of traveling back to a moment in time. Each story weaves together this beautiful book!

Twenty-two years ago, Gohtaro was homeless and in need of an opportunity when, by chance, he ran into his old college friend Shuichi. Shuchi invited Gohtaro for a chat in the cafe. After talking, Shuchi decided to give Gohtaro an opportunity to work in his restaurant hoping to help him get back on his feet. But when Shuchi and his wife suddenly die, Gohtaro takes control of the restaurant and becomes  a father to Shuchi’s orphaned daughter.

Gohtaro is eager to travel backwards in time to thank him for the opportunity he provided and to discuss Shuchi’s daughter.

Yukio moved away from his mother and sister to attend art school, but was shocked when his sister revealed his mother had passed away. He never knew she was sick. Devastated, broken and watching his life fall to pieces, Yukio travels back in time to before his mother died. He’s eager to learn why he never told her of her illness and get some closure.

Engaged to Asami, Katsuki is eager to marry the love of his life. But he’s afraid the two will never get married. So he makes an arrangement with an old friend (one readers may have met before…) and conspires to meet Asami five years into the future. But what the future holds is unexpected and devastating.

Thirty years ago, Kiyoshi was supposed to meet his wife, Kimiko at the cafe, but pulled away due to a work emergency he never made it there. And tragically, his wife died. The two were about to have an important conversation that would’ve had a huge impact on his life.

So Kiyoshi travels backwards in time to deliver a gift to his wife and the two are able to have the conversation they were never able to have.

Seasons flow in a cycle.

Life too, passes through difficult winters.

Ultimately, this book drew me right in and I loved reading the stories of those who visited the cafe. It was also great to pick up the sequel and feel even more connected and comfortable with the characters. These are two of the best books I’ve read in a long time and they are such a great pair. Sequels can sometimes be disappointing but I just loved continuing to read about traveling in time and returning to the present before the coffee gets cold.