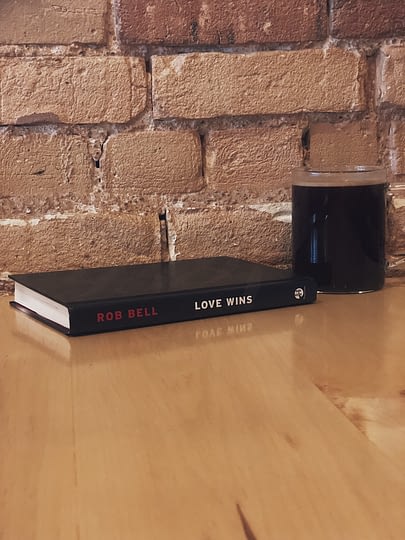 In this highly controversial, yet challenging book, Rob Bell questions the narrative Christians are fed since the first time they walk into a church. This story says, “God loves you. God cares for you. But if you don’t accept God according to our standards, you will spend your eternity suffering in hell!”

Bell questions whether or not this is Gods true message. He uses teachings from the Bible to counter this narrative and shift the story. Even if this goes against your beliefs, don’t be afraid to read. This may challenge you in ways you need.

Welcome to the weekend. I hope you’ve had a great week! For this post, I’ll be diving into a book that I’ve read, and I think you should read too.

As reading more is one of my new years resolutions, I am introducing a monthly series: Book Club. These are books, straight from my shelf that I have read and am recommending to you! The first book in this series: Love Wins by Rob Bell.

Questions or speculation about what you have been told are not necessarily bad. Often, we find that it strengthens us in ways we were not expecting.

After releasing this book, Rob Bell was called a heretic and false prophet. In the Western church sphere, his ideas are considered radical. In his time, Jesus and his ideas were seen as radical. In no way am I saying, Bell is a new Jesus, but their outpouring of viewpoints often contradicts what people think Christianity should look like.

In the past few years my faith has been challenged and has grown in many unanticipated ways. This book was another moment of growth for me personally, and I think it could be that for you, too. If you’re hesitant, but curious, give it a try! The worst thing that will happen is that you will disagree with him… and how bad is that?

Often the people most concerned about others going to hell when they die are less concerned with the hells on earth right now.