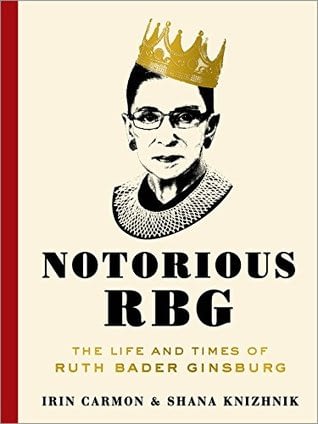 Welcome to the weekend; this weekend I am coming to you from the beautiful city of Chicago. I am here with Bryan to explore the city and see Hamilton. Keep your eye out for the blog post on this adventure.

Along the way, I was looking for the perfect book to highlight this month. National Women’s Month is March and is the perfect time to pick up a book that acknowledges the hard work of American women. That is exactly what I wanted to do. Notorious RBG by Iran Carmon & Shana Knizhnik highlights the work and life of Ruth Bader Ginsburg. Truly, I could not think of a better woman to focus on this month. Much of her work, and the main focal point of this book, is what she has achieved for the benefit of American women.

Fight for the things you care about, but do it in a way that will lead others to join you. – Ruth Bader Ginsburg

Ginsburg’s bold and unwavering confidence allowed her to accelerate her career and stand up for women in the workplace. She firmly believed equal opportunity benefits not just aspiring women, but men as well. An example of this belief at play was a case she fought early on in her career.

Detailed within Notorious RBG, she worked with Stephen Wiesenfeld, a newly single father, who’s wife passing was an emotional and financial burden he was unprepared to bear. He was the primary care-taker, and his wife carried the majority of the financial responsibility. After her passing, Wiesenfeld cut his hours and sought childcare for their son and discovered he was ineligible for Social Security benefits because of the 1935 Social Security Act. This act assisted dependent women but did not accommodate dependent men. He contested this, and with the assistance of RBG promoted the idea of “two loving parents, rather than just one.” In 1975, the decision was made that the 1935 Social Security Act was unconstitutional.

Perhaps in a book review about a feminist icon it is wrong to focus on her husband, but I melted at the details of their love story. Everyone deserves a co-partnership like the one these two shared. Martin Ginsburg supported Ruth unconditionally. He lacked no confidence and was always pleased to see her succeed.

On remembering her father, Jane Ginsburg stated, “If my first memories are of Daddy cooking, so are my last. Cooking for Mother even when he could not himself eat, nor stand in the kitchen without pain, because for him it was ever a joy to discuss the law over dinner with Mother while ensuring that she ate well and with pleasure.”

RBG is still fighting fiercely and is continuously described as, “tough as nails.” A recent and notable case came about when an eighth grade girl had been strip searched. An unverified tip lead teachers to believe the young woman carried pain relief pills, which prompted the strip search. Ginsburg emphasized the humiliation she endured as a result and thus this was ruled unconstitutional.

RBG possesses admirable resilience; despite fighting cancer more than once, she remains on the bench with her head held high. RBG insists she will do this job while she feels she can approach it full steam. And that is just what she is doing. It is unexpected that she will slow down any time soon. She will continue history-making as a Supreme Court Justice for the foreseeable future.

If you want to learn about the fantastic legacy Ruth Bader Ginsburg has created thus far, read Notorious RBG and celebrate her successes.

In my life, what I find most satisfying is that I was a part of a movement that made life better, not just for women … gender discrimination is bad for everyone. -Ruth Bader Ginsburg